Older Revision of Taking Notes with Your Digital Camera

Taking Notes with Your Digital Camera

Centuries ago, scribes were needed to make copies of documents and books, because copier technology didn't exist. After the invention of electronic copiers, mass production of books became possible. But you still had to take your original to a copier. With the invention of film cameras, clandestine services had the capability to duplicate top secret documents quickly. But it wasn't until the invention of digital cameras where the commoners like us can conveniently take notes. But it usually takes a dedicated photographer to take a camera everywhere. Nowadays, with camera phones, it's practically no brainer to take notes no matter where you are.

This article lists some note taking examples to remind you the power of your digital camera. The next time you travel, you'll be less likely to get lost.

Japan is one country where the citizen relies on the train to move around the city. Without having a copy of the train route and destinations, it's very difficult to plan you day. 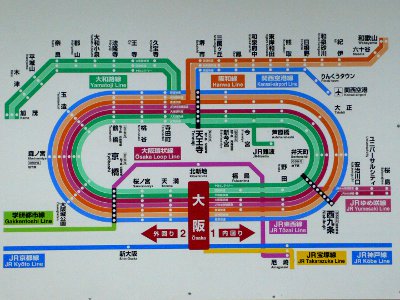 Shown in the photo above, I simply took a photo of the Osaka train lines and their routes on my Panasonic Lumix DMC-LX1 digital camera. As I tour the city, I stay one step ahead of the schedule and always have a ride to the next destination.